In 2013, following a period of fundraising to help restore it, Lisa came on board to aid in the refurbishment of West Didsbury landmark Lapwing Lane Arcade and help resolve the budgetary issues that were plaguing the project.

As well as estimates that threatened to derail the historic building exterior restoration by blowing the £100,000 raised to save it, planning had yet to be approved. Lisa worked closely with the locals involved and fellow architect John Flinn, drawing on her many years of architecture experience to help guide the refurbishment through to success.

Originally built in 1913 by the shopkeepers on Lapwing Lane, the arcade became a symbol of West Didsbury. But like so many local icons, little money had been provided to help maintain it in more recent times, which meant the cast-iron frame was rotting, cracks had appeared in the glass panes and ornate wrought iron brackets had fallen off. After an accident involving a council van, one part of the frame even had to be removed entirely.

Getting the budget under control had provided one challenge, but Lisa was also able to bring knowledge of community issues to the project, along with expertise in delivering design solutions and a 100% planning permission success rate. Lisa and John, having engaged directly with the planners, were able to establish an all-important trust with everyone involved, as well as a financial plan that worked.

“Budget has to be kept in mind to deliver realistic proposals,” she explains. “I was delighted to bring my 20 years’ experience and skills into use here to deliver a community project in my area.”

Community was always at the heart of this project, right up until its completion in May 2014. The arcade, which sits on the edge of the Ballbrook Conservation Area opposite a busy Metrolink station, features a beautiful glass canopy and ornate wrought-ironwork, which was originally designed by George Westcott and developed by Booth & Britten.

It was paid for primarily thanks to the considerable efforts of local people who established the Friends of Lapwing Lane Arcade (FOLLA) in 2012. This group not only raised £91,000 in grants, which included a Heritage Lottery Fund contribution of £25k and £16,000 from Manchester council, but was able to get the remaining £50k through the work of FOLLA Chairman Mike Bath. “Unless the local community had stepped in nothing would have been done,” says Mike.

The arcade now stands proudly on Lapwing Lane and has been championed by locals and critics alike, including architectural critic Phil Griffin. “The Lapwing Lane Arcade is a credit to all concerned,” comments Griffin. “Well done and thank you all.” 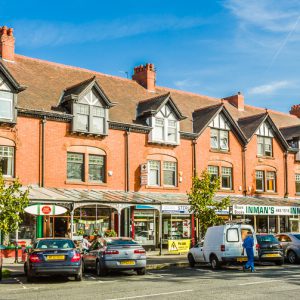 "The Lapwing Lane Arcade is a credit to all concerned. Well done and thank you all.” Phil Griffin

"Well done and thank you all"